I rocked up to the Faculty this morning all intent on writing another epic blog-post. Another 5000 words or so about Classics and War Films. Or Classics and Explosions. Maybe Classics and Really Loud Bangs. But would you believe it? As I was settling down in the Cast Gallery and opening up Word, who should appear to me but Cupid himself?

‘What d’you think you’re doing, you big wally?’ he asked (for he was in one of those moods). ‘Don’t you think people have read enough of your self-indulgent waffle for the time being? ’Ere, write something shorter, funnier. More polished. Write about that Ovid bloke. ’E knew what ’e was about. There was that seminar about him yesterday so it’s relevant an’ everything!’

So I laid aside my grand themes and lengthy word-counts and instead wrote this. Cupid’s favourite kind of Res Gerendae blog post* – the GIS summary.

It’s always fun to watch academic fashions come and go. I’m not referring to the day-to-day question of the Faculty bow-tie quotient or exactly how many people in the grad common room will be wearing brown cord trousers on any given day, but to what we all decide to study. And anyone who was present at the meet-and-greet sessions at the beginning of the year can hardly have failed to notice that Ovid is very much this year’s must-have specialisation among our new grad contingent. Never ones to fly in the face of popular opinion, or to miss an opportunity to chase attendance figures by giving the people what they want, this week your humble GIS Consuls** transformed the seminar into what – with the quiet dignity and scholarly moderation you’d expect from us – we’ve retrospectively decided to OvidPalooza 2013.

Our first paper this week came from Charles Northrop II, who asked ‘Is There a Cosmogony in Metamorphoses 11?’. As Charles explained, the themes and imagery of the creation of the universe at the beginning of the Metamorphoses’ first pentad are echoed in the story of Arachne and her tapestry at the start of the second. Should the structure not also then lead us to expect a third rehearsal of these ideas at the outset of the third pentad? Charles believes so, and took us through his idea that the beginning of Book 11 involves a kind of deferred cosmogony in which at first the demiurgic poet-creator figure of Orpheus is destroyed by the chaotic attack of the raging Bacchantes, only for order to be eventually restored by the foundation of Troy, paving the way for the final pentad’s prime focus – recent history culminating in Rome and the establishment of Augustan order. 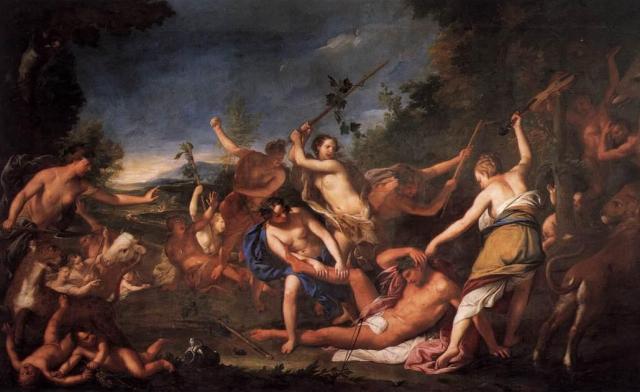 Orpheus and the Bacchantes. Ovid must have forgot to mention the violin in his version…

Charles had a few reservations about his theory – why did the repeat of the motif of the four elements during the establishment of Troy exclude fire? And what are we to make of the fact that Troy’s foundation is separated from the Orpheus episode by the fairly lengthy story of King Midas? Many of those present had suggestions. Perhaps fire is implicit in the very idea of Troy because of the looming, ever-present knowledge of its destruction? And perhaps the Midas story itself is a kind of creation gone wrong? Could this not also be applied to Troy itself, with the entire pentad then being a series of abortive attempts at the final, mortal cosmogony until Augustus is finally able to provide it?

After Charles’ discussion of the Metamorphorses, we turned our attention to another of Ovid’s works, the Tristia. Christina Tsaknaki invited thoughts on the problematic nature of the text at 5.1.23-4.

Can ‘animos’ really be the correct reading, she wondered, or is one of the alternatives that have been suggested by various scholars preferable. She plumped for Ehwald’s emendation ‘numeros’, which would have the poet addressing his verses rather than his mind. More problematic is ‘publica carmina’, which Christina felt contradicted Ovid’s repeated assertions elsewhere that the Tristia were private poems and not concerned with garnering public acclaim. Several suggestions have been made here but none of them are entirely satisfactory, either for metrical reasons or because they do not work in terms of sense. It wasn’t a problem on which we were able to offer any great progress. Suggestions were made, but generally failed to satisfy.

The dictates of academic propriety satisfied, we adjourned to the familiar sanctuary of the Granta, where discussion continued on many and varied topics, including why Apple products are overrated, which single work of ancient literature we would save if we could go back in time***, and pets. Anna Judson retains her crown for outstanding achievement in post-seminar discussion with her considered judgement that Ovid was ‘basically an elegiac poet troll’.

Which seems an appropriate note to end on. 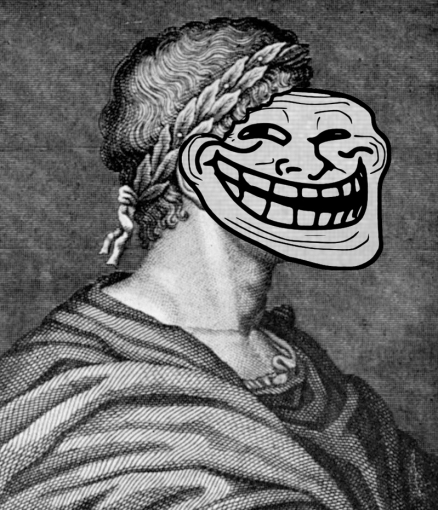 * I gather most of the rest of the Olympians are devotees of the Linguistics Cake series. As ever they reflect humanity in general, but amplified.

** Yes, that’s what we’ve decided on for our new official job title. It’s so much snappier than ‘co-ordinators’ or ‘chairs of the GIS’.

*** Those of us of a less literary bent contended that if we could have any wish it would more likely be large-scale excavation of Thebes or Tyre rather than adding yet another Ovidian text to our ample collection of Latin. Sadly, until either city can be purchased, evacuated and demolished in toto to make way for the archaeologists, we’re unlikely to get our wishes.