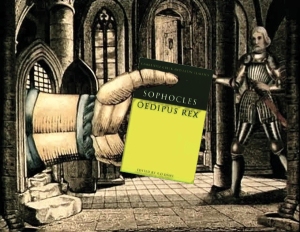 Gothic literature started in 1746 with Walpole’s The Castle of Otranto. That’s the orthodox line, the version you’ll see at the British Library exhibition. But it’s notoriously difficult to pinpoint the origins of literary genres; especially one as fuzzy and hard to define as ‘Gothic’. While there was certainly a definite tradition that started with Otranto, one thing that came quite clearly out of the exhibition was that the further you get away from that, the less cohesive and well-bounded that tradition becomes. Where do you draw the lines? Is Weird Fiction Gothic? Sometimes or always? Are zombies? What’s the difference between horror and Gothic? These aren’t questions I mean to answer – I don’t think they necessarily have simple answers – but if you include some of the more debatable offshoots of the tradition after Walpole, why not some things beforehand?

What I’m coming down to is this: is there such a thing as Classical Gothic?

It looks like an oxymoron at first. After all, the ‘Gothic’ tag Walpole attached to the second edition of his story does double service – it links it to a certain architectural style and aesthetic enjoying a revival in the eighteenth century, but it also marks the adventure’s Italian setting as specifically post-, perhaps anti-Classical. We think of Gothic as a literature of grey-skied, rainy, temperate Europe, rooted in its barbarian heritage. It stands in opposition to the idealised Culture and Reason of the Classical.

But, of course, the idea that the Classical world was a shining beacon of high culture, rationality and progress is as much an Enlightenment fantasy as Gothic literature itself. As any Classicist knows, the Greek and Roman worlds had their dark and strange underbellies, even within the mostly aristocratic texts that survive and despite any loftier ideals their great minds might have espoused. In that respect they have a great deal in common with the eighteenth, nineteenth and twentieth centuries (and doubtless with pretty much any other century you care to name). It’s not hard to find elements of the Gothic in Classical texts. Two overlapping categories particularly spring to mind: tragedy and Neronian literature.

But, in classic essay-writing style, we’re going to have to define our terms before we go much further. I’ve already said Gothic is hard to pin down, but if we’re going to look for elements and themes, we need to have to know what they are. A few features have been widely mentioned as characterising the Gothic:

An ancient, or at least antique, setting.

That’s not exhaustive, but it’s enough to be getting on with.

In his introduction to the Cambridge Companion to Gothic Fiction, Jerrold Hogle refers to Gothic fiction as an Oedipal genre because of its love and loathing of the past – the fifth point in the list above. Freud has been the starting point for a lot of writers in their thinking about Gothic: both his writings on psychoanalysis and his theories about the uncanny. So it’s no big surprise, then, that the Oedipus story itself ticks pretty much every box for Gothic. It’s set in the mythical past, even by Classical standards, in the crumbling and troubled palace of Thebes. The whole play revolves around Oedipus’s repressed memory coming to the fore and the havoc that causes (though the only monster is the absent Sphinx). The messed-up gender roles surrounding Jocasta are so obvious I hardly need mention them, and both her fate and that of her erstwhile husband Laios are cases of tragically mistaken identity. Bodily transgressions and breakdowns also feature prominently. Again Oedipus’ interactions with his parents, his self-mutilation, but also the preponderance of physical disabilities and disease. Incest, regicide and patricide is pretty much the trifecta of totemic transgressions. Bung it in a Gormenghast-style castle set, dress everyone in pseudo-mediaeval costumes and you’d recognise this as pure Gothica in a heartbeat.

Another one that immediately springs to mind is Euripides’ Bacchae, probably the standout Greek text on the violent explosion of repressed desire. Even more than Oedipus, it captures the sex, violence and scandal aspect of Gothic fiction. It’s about a band of cultists (female, naturally) belonging to an exotic, barbarian religion, bringing their dangerous and seductive god to ordered society, upturning the status quo and scandalising the prudish and prurient Pentheus with their refusal to conform to their expected gender roles. The women are outdoors on their own (!), up to who-knows-what in the dead of night (!!) and their leader’s a sexy, suave, uncomfortably effeminate man with supernatural powers (!!!) It has cross-dressing, mistaken identity (again), and culminates in a blood-soaked gore-fest with the brutal murder of a son by his own unknowing mother. Sounds pretty Gothic to me.

One more and I think I’ve made my point. The House of Atreus. Obviously there’s not actually a play called that, but it was the name of the Cambridge second-year tragedy course when I took it a decade ago. As an umbrella term for the various plays surrounding Agamemnon and his family, even then it struck me as having a particularly Gothic ring to it, echoing Poe’s House of Usher. But we can hardly label these stories Gothic based on the title of a Cambridge course, vitally important though the Classics Tripos undoubtedly is. Fortunately for my argument the same themes are there again. Mythical past, check. Once-great Palace Gone to the Dogs, check. Women Not Acting The Way They’re Supposed To, check. Bodily violation, check. The later volumes in the Oresteia even give us some proper monsters in the shape of the Furies. Less said about the courtroom drama ending, the better…

But while Aeschylos’s definitive take on this story has its share of Gothic elements, it’s Seneca’s Latin take on the cycle which really hits all the Gothic marks, and brings me into the second area I want to talk about.

I’ve mainly talked about Greek stuff so far, but it’s the Romans who are the masters of ancient Gothic. Stuffy, pompous, jackbooted, morally-preachy-but-terrified-by-their-own-depravity, they’re the high Victorians of antiquity. Even the most straitlaced and respectable of Roman writers have at least some stuff that can be read in terms of Gothic themes. I’ve written before about the bit where Cicero kind of loses it a bit and accuses a foe of necromancy and cannibalism, and there’s a rich seam of Gothic in imagery in the Aeneid, especially Book VI. But the Neronian period’s where things really kick off. I can’t help thinking of it as antiquity’s answer to the 1980s, and if Aeschylos’s Oresteia is the worthy literary take on the House of Atreus stories, Seneca’s Thyestes is the straight-to-video-nasty schlock prequel.

It’s trash. But I really, really like it. I think I like it more than the Oresteia, and I like it even more because I know that’s wrong. Thyestes is the House of Atreus story with the gore turned up to eleven. From beginning to end it’s an exuberant, excessive carnival of body-parts, violence, transgression and blood, all lovingly described and just daring you to be repulsed. It’s horror, but is it Gothic? Absolutely. Brotherly rivalry, incest, secrets, lies, dismemberment and unwitting cannibalism (mistaken identity taken to the limit here, as Thyesetes mistakes his kids for dinner), all set in an ancient palace entering the last years of its dynasty.

But it’s not just the tragedy that’s Gothic in Neronian literature; arguably the whole tenor of the age is. As it’s passed down in literature, Nero’s whole court is like The Masque of the Red Death, a pageant of excess, bad taste, violence and spectacle. I’m going to talk about Petronius now, which may ring alarm bells for at least one current Cambridge PhD student, who argues the traditional attribution of his Satyricon to the Neronian period is mistaken. But even if it does post-date Nero’s court, Trimalchio is undoubtedly based on Nero and his dinner party is a comment on, and response to, the mores and style of his court. Needless to say, it’s every bit as brash, excessive and tacky as we imagine Nero himself to have been. From the dishes he serves to Trimalchio himself, the dinner-party is filled with the artificial and the false: nothing is what it pretends to be. As a comedy freedman, a social-climbing upstart with delusions of upper-classdom, Trimalchio embodies the Gothic ambivalence towards aristocracy and social mobility. But what elevates the story from the Neronian Keeping Up Appearances to a genuine work of the Gothic is that it’s positively dripping with monsters. Witches, owls, and, most delightfully, a very early but wholly recognisable werewolf story. The monstrosity of Trimalchio/Nero’s court is contrasted and reflected in these monstrous tales. Not just in its excess but in this horrific vein, it presages the later concerns and methods of Gothic fiction.

So while I’m not saying there was any kind of unbroken tradition connecting these Classical works to Gothic fiction of the eighteenth century and beyond, there is a wealth of material which can be read as Gothic or could easily be staged or retold as Gothic without much change. Which is reason enough, if any reason were needed beyond the fact that it’s really good, why any Classicist should get themselves over to the British Library and take in their exhibition.

Terror and Wonder: The Gothic Imagination is on at the British Library until 20 January 2015. Adaptations of The Castle of Otranto and other Gothic classics are currently available from BBC Radio 4 Extra, and there’s a bunch of Gothumentaries from the BBC’s usual suspects on iPlayer.