Every time I think I’m done with the clay tablets, I find just one more thing. You can read up on the full story about my experiments with writing ancient tablets at these links:

Part 2 – A better stylus and first attempts at biscuits

And for more on the academic component of Clay Play Day and the Linear A seminars, take a look at Anna Judson’s write-up.

Right, on to this instalment, which is unashamedly aesthetic rather than academic. When I ended part 3, my newly-made clay tablets were drying in the CREWS Project office, looking like this: 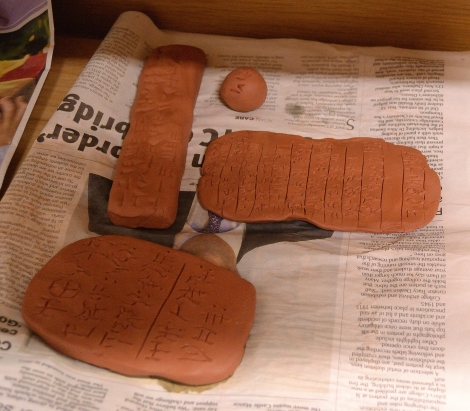 I’ve been working from home for a while, but over the weekend I finally collected them and saw them for the first time dry. They looked good, but the pristine new air-drying clay had dried very bright, making them look like they were straight out of a brickyard or a primary school art class. They looked a bit stark on my mantelpiece, so I decided to paint them.

Obviously this is completely historically inaccurate, but then the Linear B tablet wouldn’t have been kept as a long-term archival or display item anyway. Ancient clay was not perfect and even when it was fired deliberately (as opposed to accidentally when an archive burned down), variations in the conditions in the kiln would have a major effect on the colours of the resulting tablet. So I got out my acrylics and a tester-pot of emulsion left over from when we were decorating the house and started mixing up some thin washes that I layered up to give them a more ‘authentic’ appearance.

It was mostly trial and error, with lots of slopping the painting on and rubbing it off again to get a subtle effect that didn’t completely obliterate the original colour of the clay. I used several layers to build up the effect, including some dry-brushing to bring out the detail of the inscriptions, especially on the Akkadian. They’re not perfect – I perhaps went a bit far in places and I don’t have a massive range of paint colours here so it’s very much a first effort with the resources available on the spur of the moment, but in general I think they look better. I did have to slightly redefine some of the inscription signs, particularly on the Linear A tablet, as the washes softened the clay very slightly, and paint slightly filled in some of the finer cuts. I did that without too much trouble using a scalpel, taking care just to open the original line back up, not to cut a new one.

Anyway, here are the end results. 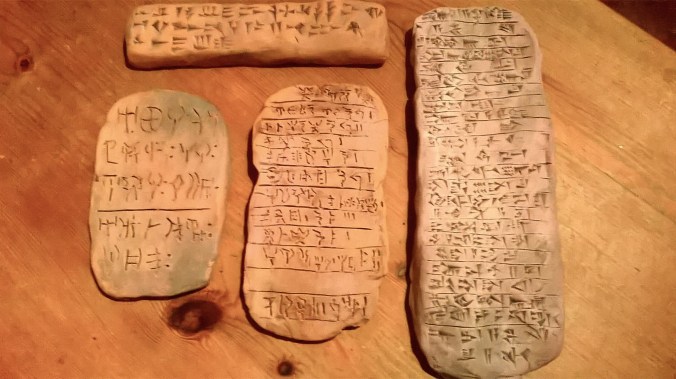