It was my birthday last Monday, and I was lucky enough to spend it behind the scenes at the Fitzwilliam Museum. Together with my fellow members of the CREWS Project, we were helping with the installation of a new temporary exhibition on ancient writing, a collaboration between our project and the Museum.

It includes a range of objects with a diverse assortment of ancient writing-systems, from Babylonian cuneiform to Egyptian hieroglyphs, the Phoenician and Greek alphabets, and more. Some of these items come from the Fitzwilliam’s own collection, but we’re also very fortunate to have some objects on loan from the British Museum. I did my PhD on the Phoenicians, so I was particularly interested in an arrowhead inscribed in early Phoenician, and in the famous Idalion bilingual, which has inscriptions in both Phoenician and the Cypriot syllabary. 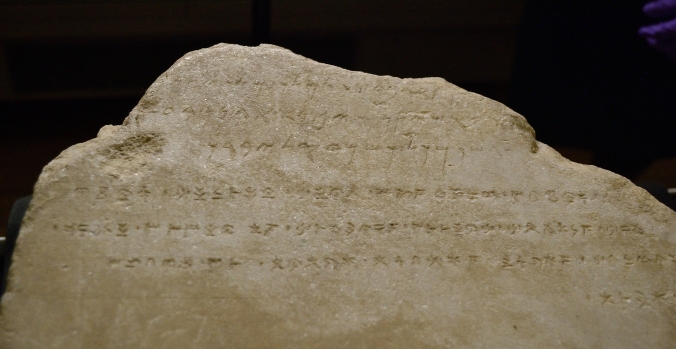 I’ve worked in museums in the past and have been involved in preparing objects for loan, but I’d never seen the other end of the process before, so it was fascinating to see how the Fitzwilliam received the loans and the process of examination they go through by both Fitzwilliam and British Museum staff.

But from a personal perspective, the thing that gave me the biggest thrill was that the exhibition includes some of the tablets we’ve made on the CREWS Project. I’ve written several times here about my experiments with writing Ugaritic, and it was a lovely culmination of these to be able to see one of my replica tablets being carefully installed in a museum alongside genuine ancient material. I’ve always enjoyed arts and crafts and I can now honestly say that a piece of my work has been exhibited by a major museum and art gallery! That’s a birthday present worth coming into work for.

For everyone else, though, it’ll be the ancient writing that will be the big draw. If you’re around Cambridge, please do come along to the Cyprus gallery at the Fitzwilliam Museum and take a look at the fascinating diversity of ancient writing and the objects it appears on. The exhibition is free and runs until 10 June 2018.

We’ll also be posting lots of information about the objects in the exhibition to the CREWS blog over the coming months, so do check that out too!