Have there ever been two words that go together quite so evocatively and conjure such boundless possibility? From 1978 to 1999 Lego released an unbroken sequence of original space sets, more than twenty years’ worth of spaceships, bases, rovers and robots. I was lucky enough to grow up right in the middle of this, a geeky kid as fascinated by space and science fiction as I was by knights and castles. Needless to say, I had a lot of space Lego.

I’ve written elsewhere about my own experience of a childhood lived through Lego bricks, about how those little plastic pieces lent physical reality and material texture to my imagination, how they continue to encode memories of my early life. What I’m interested in here is the world of Lego Space itself, and how it drew from outside inspiration. These ship designs and imagined spaces that mean so much to me – loosely defined but vividly depicted – where did they come from?  What were the influences on the small group of predominantly Danish designers who created them?

From the dates it’s often assumed that the inception of the Lego Space range was prompted by the success of Star Wars in 1977, but that doesn’t really add up. Space was just part of a major shake-up in the Lego range in the late 70s, which had been in the works for several years. After decades in which sets of all kinds and all scales coexisted in a single, nebulous ‘Legoland’, 1978 saw two colossal changes – the introduction of the now iconic Lego minifigure and the creation of more or less demarcated ‘themes’ scaled to fit them – not just Space but Castle and Town. According to Jens Nygaard Knudsen, the designer of the minifigure and first overseer of Space, the earliest in-house prototypes for these new themes were space-based, and the fully fledged Space theme was finished and ready by 1976. For commercial reasons it was held back for release until 1978 in America and 1979 in Europe.

It’s not to Star Wars that we should look for the design inspirations of the earliest Space sets but to the 1960s and early 1970s. The range was being developed only a few years after the moon landing and the Apollo missions cast a long shadow over the early years of what Lego fans now call ‘Classic Space’. Those white and black rockets, the lunar grey cratered baseplates, the white-suited near-future astronauts on a mission of exploration.

Even from the outset, though, Classic Space had a somewhat split personality. Alongside the NASA-inspired sets were much more fantastical ships in signature blue-and-grey livery. Over time this imaginative element came to be more and more dominant, and this is where we do start to see Star Wars influences, such as in this AT-AT-inspired walker from 1986:

In general, designs are exploration and science-focused (Lego traditionally being very reticent about depicting conflict or realistic weaponry), but once we’re out of the initial 1978 wave, it’s hard to identify a single coherent design aesthetic in Classic Space. The sets are incredibly diverse and often deeply eccentric. More than anything, they look like the results of designers being given a bin of parts and rummaging around to make something cool – in other words, exactly the kind of experience the children who played with them would have.

This changes towards the end of the 80s as Classic Space gradually blended into a new theme known as Futuron.

This name is telling, reflecting the theme’s much more well-defined, futuristic look that left the realities of NASA’s moon missions and the slightly ad-hoc experimentalism of later Classic Space far behind. White and austere, industrial without straying into the grubby, broken-down world of Star Wars’ ‘used future’, the NASA heritage is still there, but as the theme’s name suggests, this outer-space world of domes and monorails feels like something from futurist concept art rather than the realities of contemporary space exploration.

What it most resembles, perhaps, is the optimistic child-friendly futurism of things like the Usborne Book of the Future (1979), which drew from the same well of optimistic scientific future-gazing.

We shouldn’t overlook the influence of TV and film in this, but it’s not Star Wars so much as the NASA-inflected future of 2001: A Space Odyssey which seems to be the main cinematic inspiration. 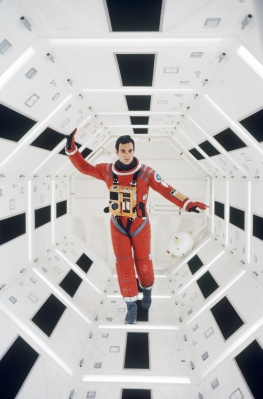 In TV, we should look to Gerry Anderson’s Space 1999. The gleaming white is all present and correct, as is the future-NASA aesthetic, especially in the modelwork by the legendary Derek Meddings. 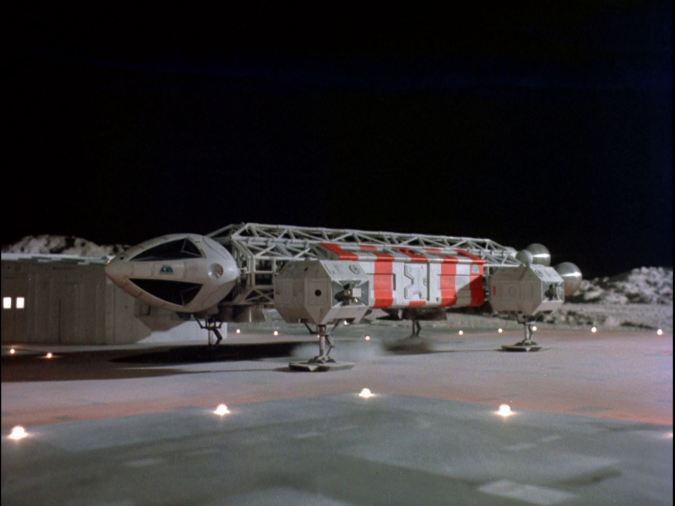 In this interview, Lego designer Bjarne Tveskov specifically mentions Space 1999’s famous Eagle spacecraft as the inspiration for the build that landed him his job at Lego. He went on to design several Futuron sets, including the much sought-after (and now notoriously expensive) monorail. Even the Futuron astronauts’ white outfits with asymmetric, colour-coded accents seem to echo those from Space 1999, crossed, perhaps, with the uniforms from the Star Trek movies. (Incidentally, if you want your own Lego Eagle, there are free building instructions for a good one available here).

Soon after the introduction of Futuron, Lego introduced a second Space faction – Blacktron. They never outright said they were the baddies, but they were clearly the baddies. Their vehicles had a more angular, jagged look than Futuron, in sinister-looking black-and-yellow livery. Their base is, I think, the finest space base Lego has ever done, and I was very pleased when I recently managed to gather the pieces to build my own. 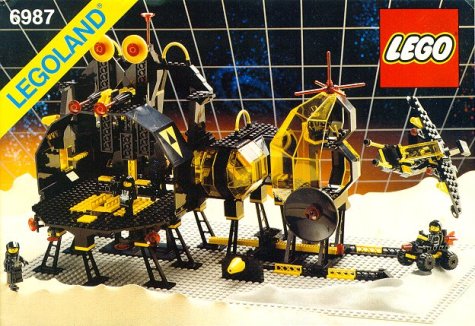 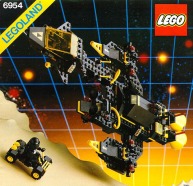 With Blacktron, Lego ventured further away from NASA and more into the territory of Saturday morning cartoons, with black-clad villains in evil-looking spaceships. Actually, it’s tempting to draw a connection with a specific cartoon series, or rather the 80s toy line it was created to sell. StarCom featured bad guys with a very similar look to Blacktron and an almost identical ‘upside-down Triforce’ logo, and it came out in 1986, the year before the first Blacktron sets. 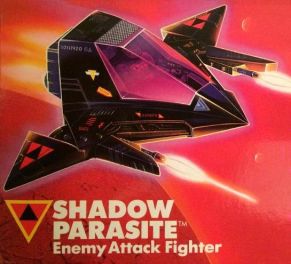 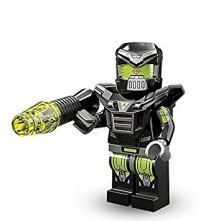 A Blacktron robot from the recent collectible minifgure range

But the StarCom toys didn’t make much impact in America and weren’t released in Europe until 1990 (where they were much more successful), so I’m not sure whether the design similarities are anything more than coincidence. Certainly, Lego had been developing Blacktron since at least 1985.

Blacktron soon got an appropriately cartoonish set of antagonists in the form of the Space Police.

Something about this range is just gloriously 80s, but I can’t quite put my finger on it. Maybe it’s the combination of blue and glowing red, which puts me in mind of the colour palettes of movies like Blade Runner or Terminator. The vehicles feel chunkier, more solid, than many of their predecessors, and the big spaceship in particular is gorgeous.

Throughout this, there’s been a sense that Lego hasn’t ever quite hit the zeitgeist of science-fiction or interest in space, but tended to lag five to ten years behind whatever inspirations they were drawing on. So sure enough, with the advent of the 90s, things go full late-80s, with neon. Neon EVERYWHERE.

But we’ll look at that another time…