Most people probably don’t associate Doctor Who with the Aegean Bronze Age. I mean, why would you? They’ve only done two stories set there and one is entirely missing from the archives. But when you delve a bit more closely, there’s a thread of Bronze Age stuff running through from the very first episode and lasting at least until the end of seventies.

Here’s the TARDIS in the very first episode of Doctor Who, in November 1963. Isn’t it lovely? 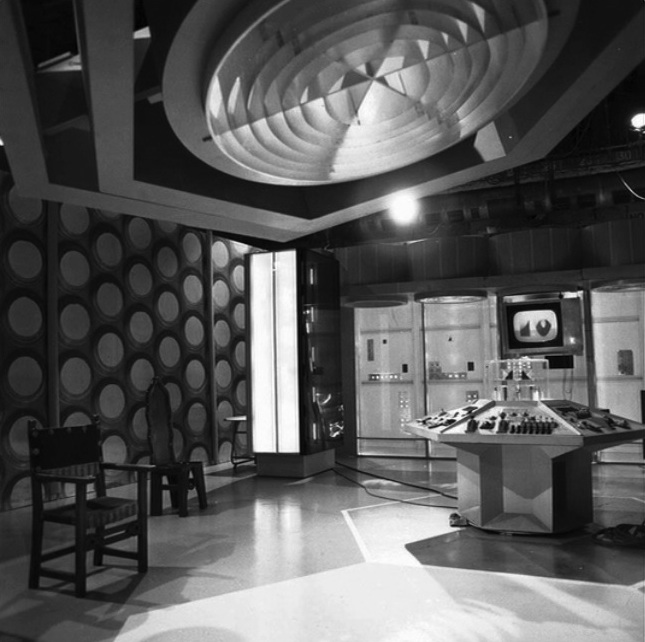 And that funny-looking chair is a replica of the stone one found in the ‘throne room’ at the Bronze Age palace of Knossos on Crete.

A similar replica can still be seen in the palace today, and the site’s excavator, Arthur Evans, had one in the hallway of his house. That one’s now owned by the Ashmolean Museum in Oxford. My guess – and it’s only a guess – is that the TARDIS prop and the Evans one may have been made around the same time, in the early 20th century. I wouldn’t be surprised if the Gilliérons – a Swiss father and son team of archaeological artists and replica-makers who were heavily involved with Evans and the reconstruction of Knossos – had something to do with them. The chair was a semi-permanent fixture of the TARDIS console room for fourteen years, and was last seen, to my knowledge, in the short-lived and cosy wood-panelled version during Tom Baker’s tenure as the Doctor. 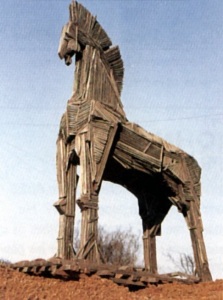 Whatever the provenance of the TARDIS Knossos throne, we don’t have to wait long for a definite bit of Gilliéron art in Doctor Who. In 1965 the TARDIS landed in the Trojan War for a story called The Myth Makers. This, unfortunately, is the one that’s lost from the archives, apart from its audio. From that we can tell that it’s really rather good. My favourite adaptation of the fall of Troy, in fact. It’s mostly played for laughs – BBC executives allegedly vetoed calling one of the episodes ‘Is There a Doctor in the Horse?’ – before performing a hairpin turn into bloody massacre in the final part. It’s all a bit Saturday tea-time Game of Thrones.

Sadly, we don’t even have too many pictures of this one. The horse looked great; the Greek soldiers seem to be wearing Classical hoplite-style outfits rather than appropriate Bronze Age armour, but we do have a picture of the interior of Priam’s palace that shows the BBC set designers did try for an authentic Bronze Age look, even if it’s Crete rather than Anatolia. 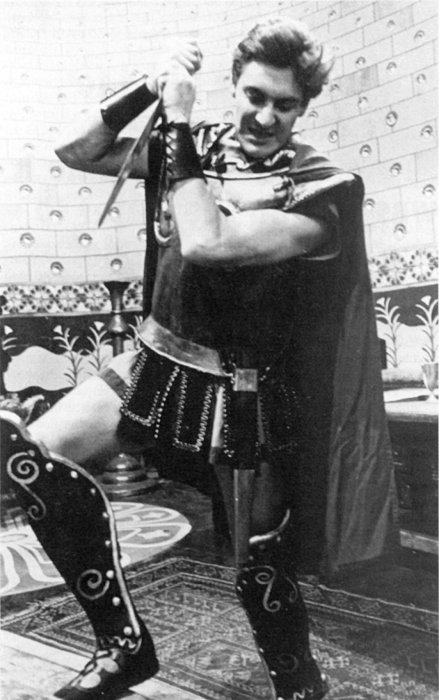 The frieze on that wall in the background is taken straight from Knossos – or rather from the Gilliérons’ painted reconstructions of its frescoes. In fact, it’s the same throne room as the TARDIS chair. 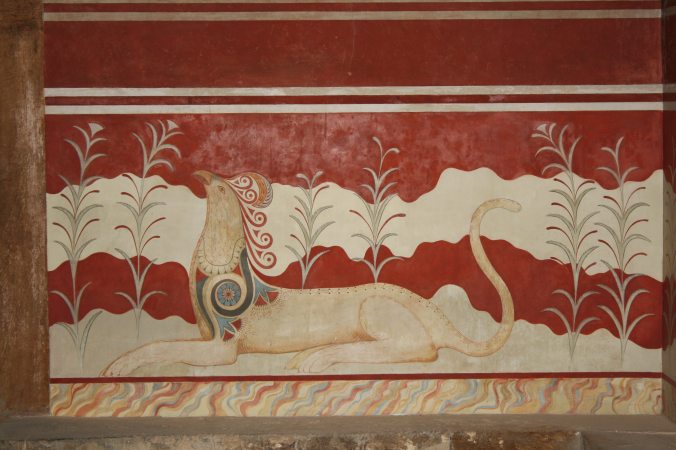 The wavy lines, like those on the throne itself, are probably intended to evoke mountains. Bronze Age Cretan cult favoured natural settings over constructed temples, and many of the most important sanctuaries are to be found on Crete’s mountains. It’s important to recognise, though, how much of this is reconstructed. Here’s what the same room looked like during excavation:

The frescoes you see now – both at the palace and in the museum in Heraklion – have been heavily reconstructed by the Gilliérons under Evans’ instruction. It wouldn’t be going too far to say that they invented popular images of ‘the Minoans’ as much as discovered them. The ‘throne room’ itself, incidentally, probably isn’t a throne room at all, in the conventional sense, but more likely a ritual room with the chair being used by a priest or priestess.

The first Doctor had other brushes with the Bronze Age in the wider Mediterranean – most notably a brief stop at the Great Pyramid along with the Daleks. Unfortunately the most relevant episode is also lost – there’s just a bit of surviving Egypt stuff at the start of the following one. So let’s move on to the 70s and the great big Doctor Who Bronze Age blow-out that is The Time Monster.

A glorious mess of a story, The Time Monster is partly set in Cambridge and partly in Bronze Age Thera, so you can see why I’d like it more than its slightly dubious reputation might warrant. It takes as its starting point the idea that the island of Thera – destroyed by a volcanic eruption – was the historical basis for the legend of Atlantis (one of at least four explanations for Atlantis offered by the series). This was something suggested by the archaeologist Spyridon Marinatos in 1939. The story comes pretty close to outright citing his article in its first episode, and it’s noteworthy that the following year the same production team took the TARDIS to a planet Spyridon.

Someone involved in the Time Monster clearly had a few Minoan art books. Let’s take a closer look at some of its fabulous art direction.

First up, in the trippy opening dream sequence, are some snazzy quadruple-axes. Double-axes are iconic of Bronze Age Crete and the area it influenced culturally. We don’t quite know what they symbolised, but they were clearly a very potent ritual symbol. Sometimes the blades come to double points like these, 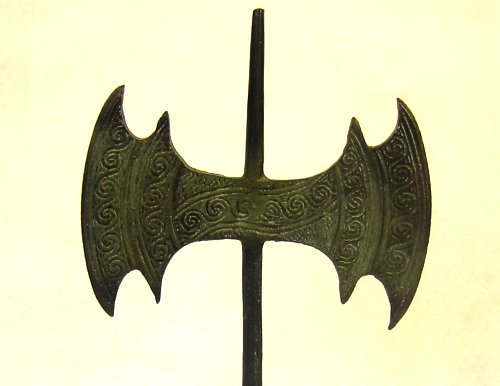 but as far as I know they’re never mirror-rotated to form quadruple-axes like the ones in Doctor Who. What I think is that someone saw these double-axes on the Aghia Triadha Sarcophagus and misinterpreted them. Look how similar the stands are. 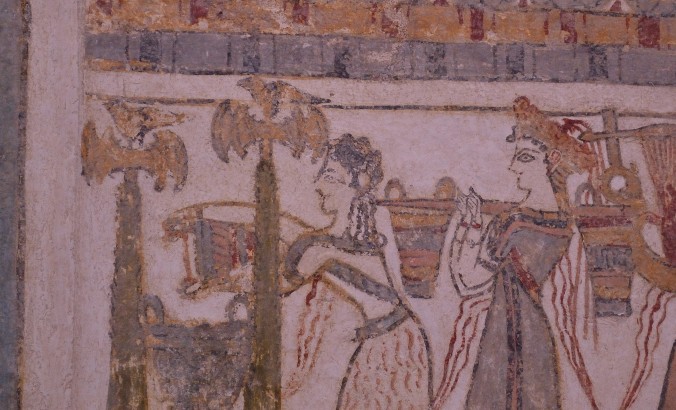 We know they’d seen the sarcophagus because, blown-up to huge scale, it appears as a fresco wall-decoration outside the palace. 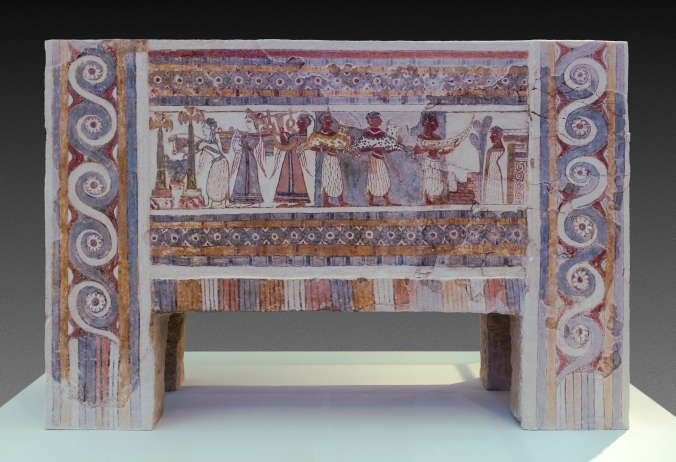 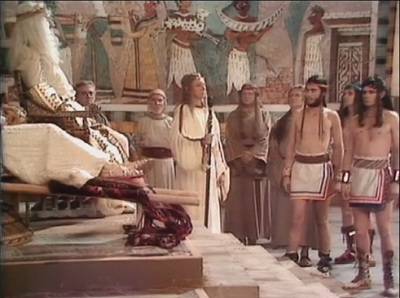 This sarcophagus is actually a bit late for Thera, postdating its destruction, but it’s not too far out so we’ll let them off.

The palace background itself (or is it a shrine?) is a bit of a mish-mash. Starting from the left on this image, those columns that get wider towards the top are known from Cretan architecture and can be seen in frescoes and the reconstructed Palace of Knossos. They’re not usually fluted, though; that’s more characteristic of Classical Greek columns. 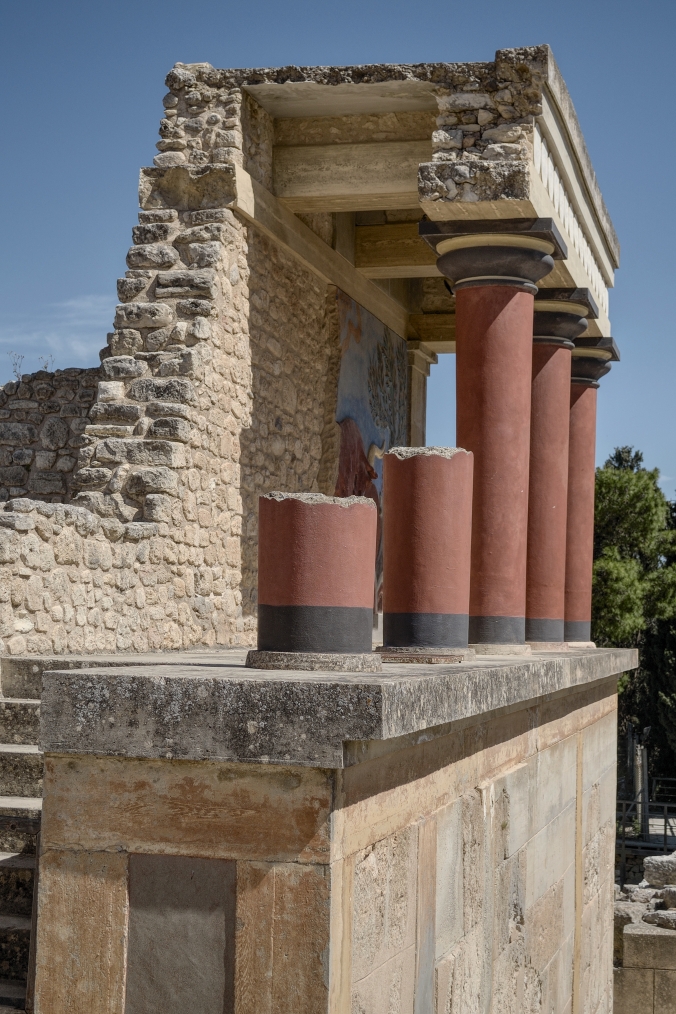 The decoration along the top of the palace façade is more authentic, though. It’s covered in ‘horns of consecration’, another ubiquitous Minoan religious and architectural feature that was indeed used to line rooftops.

It’s also seen in a fresco from Thera itself, where it seems to be dripping with blood. Again, the meaning of the symbol isn’t fully understood, but it seems to be related to the Cretan obsession with bulls – double-axes often appear between the horns of both. 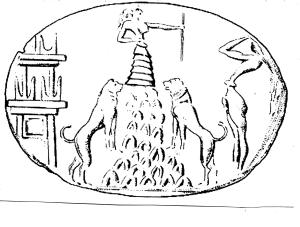 The central motif on the Doctor Who palace is hard to make out in the pictures I can find, but seems to be a fairly typical Minoan/Mycenaean arrangement of a central pillar flanked by rampant creatures – possibly lions. This motif has Near Eastern origins and is quite well known from Cretan seal-rings like this one. In this case, I think a more immediate inspiration is the famous lion-gate at Mycenae. 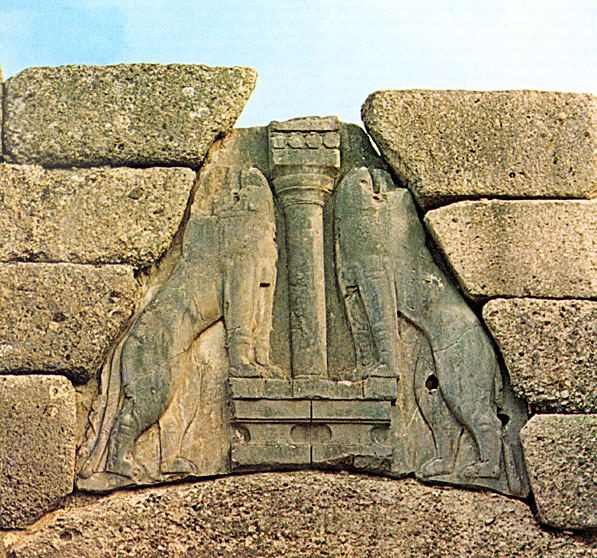 Mycenae is on the Greek mainland, and while it wasn’t Minoan itself, there was a lot of cultural influence both ways, so its use here isn’t too bad a slip.

The same can’t be said for the statues holding up the palace lintel. These are known as caryatids and are a feature of much later Greek art. The most famous ones are to be found in the Erechtheion on the Acropolis at Athens.

As far as I know, there’s no evidence for caryatids in the Aegean Bronze Age, but someone clearly liked them, because there are more in the labyrinth beneath the Time Monster’s palace: 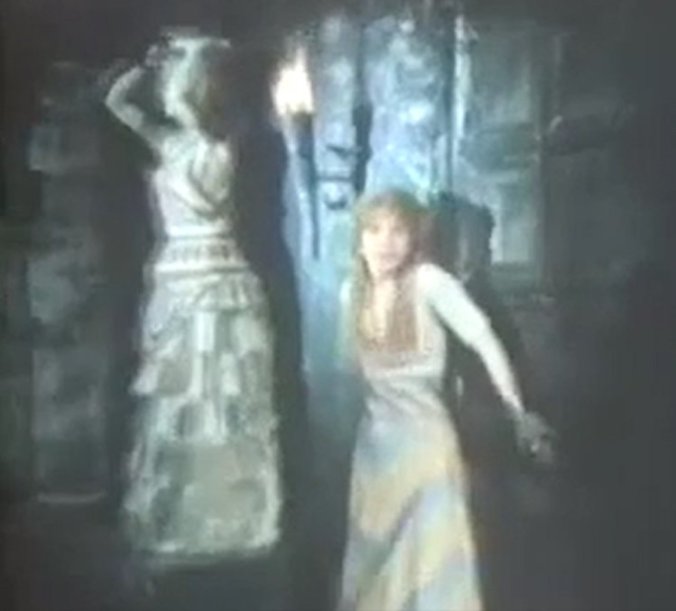 These ones are a little bit more plausibly Minoan, though, in that they’re based on the famous Minoan ‘snake goddess’. These are a set of figurines – large action figure sized – of women holding snakes. 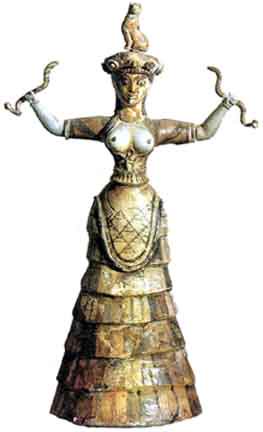 Same old story: ritual, but we’re not really sure what they mean. Some people have thought they might be fakes, but they’re generally accepted as genuine.

The last thing to talk about with the Time Monster is the costumes, the wonderful, wonderful costumes. You’ve got to hand it to them – they’ve managed the closest thing I’ve ever seen to an accurate depiction of Minoan female dress on TV, and in a children’s programme too. Minoan female dress appears quite a lot in frescoes and seal imagery, and it’s very often rather drafty in the front. Queen Galleia’s outfit seems to be based on this illustration:

The guards’ armour isn’t too bad either. I think I see a bit of inspiration from the Dendra armour from mainland Greece, though some liberties have been taken.

Most notably they’re lacking the characteristic Mycenaean boar’s tusk helmets, which can be seen on a warrior fresco from Thera: 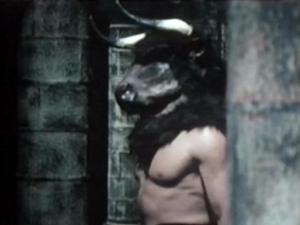 Finally, a few words about the Minotaur. First, that’s David ‘Darth Vader’ Prowse under the bull head. He really gets to show his range in this. No, sorry, torso. He gets to show his torso in this. More importantly for our purposes, let’s have a look at that bull-head. Bulls are of course closely associated with Bronze Age Crete, both in myth and archaeology. Bull iconography is very common and Cretans even seem to have taken part in a kind of sport known as bull-leaping, where the object is to jump over a charging bull. One of those ‘easy-to-explain, difficult-to-master’ games.

Anyway, a bull-head is to some extent a bull-head, but I don’t think I’m reaching too much to see a bit of influence from this famous rhyton from Knossos in the design of the Doctor Who minotaur. A rhyton, by the way, is a ritual vessel for pouring libations.

After the Time Monster, pickings are a bit more slim. The Knossos throne is still making occasional appearances in the TARDIS, but there are no more proper Bronze Age stories. The nearest we get is 1979’s The Horns of Nimon, which is more of a panto adaptation of Theseus and the Minotaur in space than any reflection on the real Bronze Age. Nevertheless, the gold horns of the bull-headed aliens perhaps echo the Knossos rhyton, and the use of similar horns as architectural features may be a riff on horns of consecration.

I hope you’ve enjoyed this look at the ancient origins of Doctor Who’s Bronze Age-inspired visual culture. I may come back and do similar things for Egypt or Mesopotamia. You have been warned…